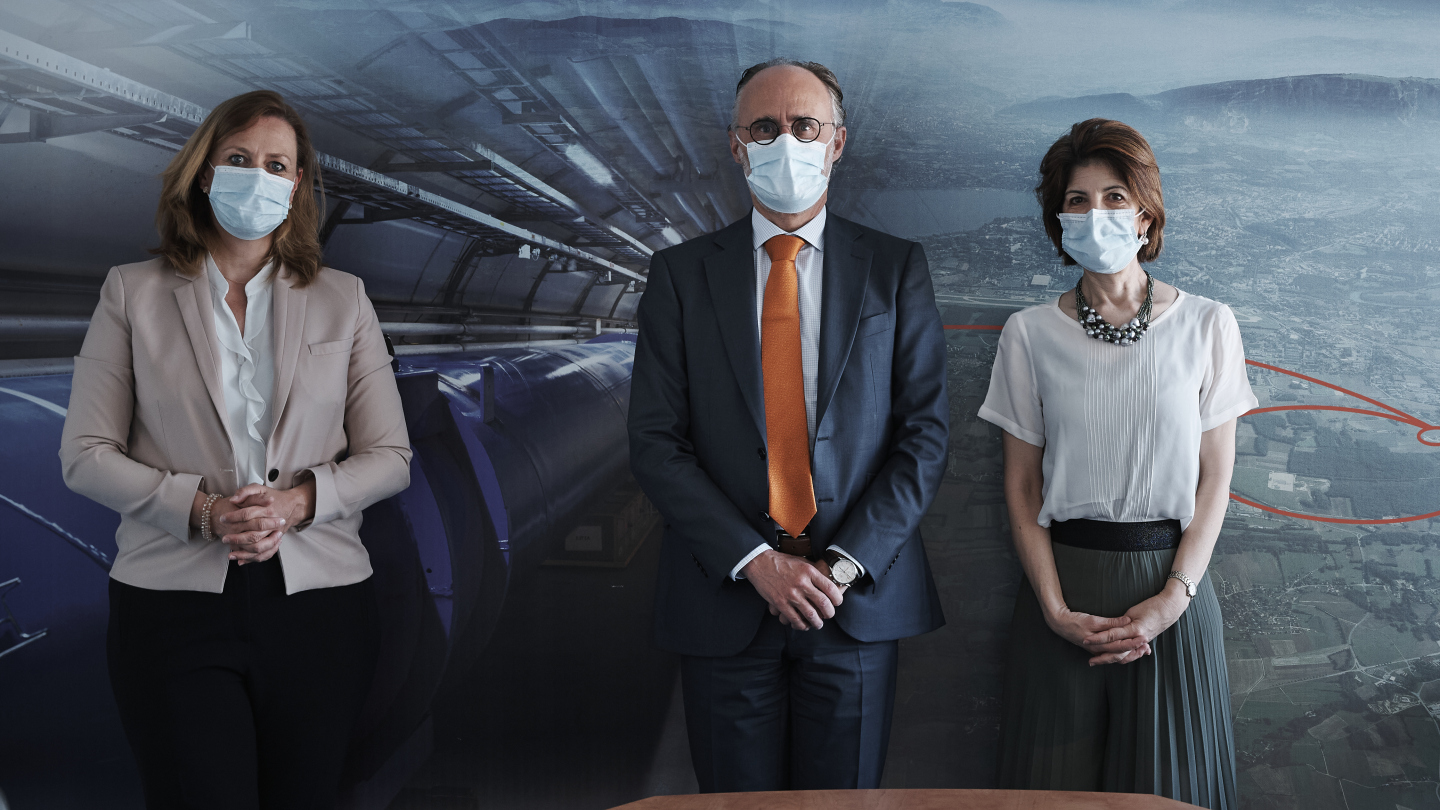 Above in the center, Ambassador Geert Muylle, during a visit in July 2020 to CERN Director General Fabiola Gianotti - on the right side, in the presence of CERN Director of International Relations, Charlotte Warakaulle - on the left side (picture from Julien Ordan, CERN).

This summer, Ambassador Geert Muylle ends his four-year mission as Head of the Permanent Mission of Belgium to the United Nations Office and specialised agencies in Geneva. On this occasion, we took the opportunity to interview him and get his impressions of his experience in Geneva and in particular with CERN.

Interview conducted by phone on Tuesday July 28, 2020 by François Briard.

Could you briefly present your professional background?

I studied law in Leuven, Belgium, and then international and political relations in Louvain-la-Neuve. Later I obtained a diploma in business administration.

My career as a diplomat started in 1990 with various missions in Poland, the former Yugoslavia, Geneva and France. In Brussels, I was advisor to the Prime Minister, Ambassador to the EU's PSC (Political and Security Committee), Ambassador to NATO and I was Director General and member of the Executive Board of the Ministry of Foreign Affairs.

I am currently completing a four-year mission at the Permanent Mission of Belgium to the United Nations Office and specialised agencies in Geneva and my next mission will be in Berlin.

What was your role in Geneva?

I was Head of the Belgian Mission, which aims to maintain close relations with the various international organisations established in Geneva, whether they are UN or not, such as CERN, and as a member of all these organisations, to contribute to their operation and relevance.

Belgium is doing everything to ensure that the multilateral system, born a little over 100 years ago in Geneva and in which we are an important stakeholder, continues to operate, is relevant and succeeds in carrying out its mission. We need a world that functions in an orderly manner according to agreed and homogeneous rules, close to our fundamental values: the rule of law, democracy and human rights.

Belgium achieves this objective by taking part in various organisations and commissions but also by taking on facilitator responsibilities such as presidencies and vice-presidencies. This was my case at the International Organization for Migration (IOM), the United Nations High Commissioner for Refugees (UNHCR), the Human Rights Council and the Council for Trade in Services at the WTO.

What did you know about CERN before coming to Geneva?

The first time I came to Geneva, 20 years ago, the LHC was under construction. At the time, there was already a good public communication effort on the activities of CERN and its (then) future accelerator. So I had already learned a lot of things about CERN, its missions, its tools and the people who bring it to life.

How do you see CERN in international Geneva?

Is the question important? CERN clearly has its differences compared to other international organisations in Geneva and it is very good that way. This allows it to chart its course independently.

I am sure that CERN has a lot to contribute to international Geneva. The example of the provision of CERN's IT technologies and resources for UNOSAT, which analyses satellite images for the United Nations Institute for Training and Research (UNITAR), is a prime example.

What were your activities in relation to CERN during your mission in Geneva?

Belgium has a tradition of entrusting its representation in the de facto Council to people close to the academic world. I followed the line. Currently, Ms. Véronique Halloin (FNRS) and Professor Dirk Ryckbosch (UGent) sit in the CERN Council; they do a great job there. So no reason to change this system which works very well, in excellent harmony with myself.

Of course, I have regularly met CERN's Director General, Fabiola Gianotti, but also other key people for relations with Belgium, such as Thierry Lagrange, Management Liaison for Belgium.

With a contribution to the CERN budget of over 31 million Swiss francs, CERN obviously attracts the interest of the federal and regional ministers in our country. We were able to organise, in collaboration with the excellent CERN Protocol service, many excellent Belgian visits.

What did you learn about CERN during your mission?

The results or applications of technologies developed at CERN sometimes take place in unexpected fields. I thus had the opportunity to visit, in February 2018, ISOLDE and MEDICIS which allow the production of isotopes for medical research, but also for the detection and treatment of cancers.

Concerning the relations between CERN and Belgium, should any efforts be made in a particular area?

It is clear that there is room for improvement to attract more Belgian companies to conclude contracts with CERN.

I also hope that a solution will be found for hosting a business incubator in Belgium to transfer technologies developed at CERN.

Finally, it is essential that CERN maintains its efforts to promote STEM (Science, Technology, Engineering and Mathematics) among young people (note: see in this regard our article on the future Belgian HSSIP programme in 2021).

From September 1, 2020, Ambassador Muylle will be replaced by Ambassador Marc Pecsteen at the Head of the Permanent Mission of Belgium to the United Nations Office and specialised agencies in Geneva.